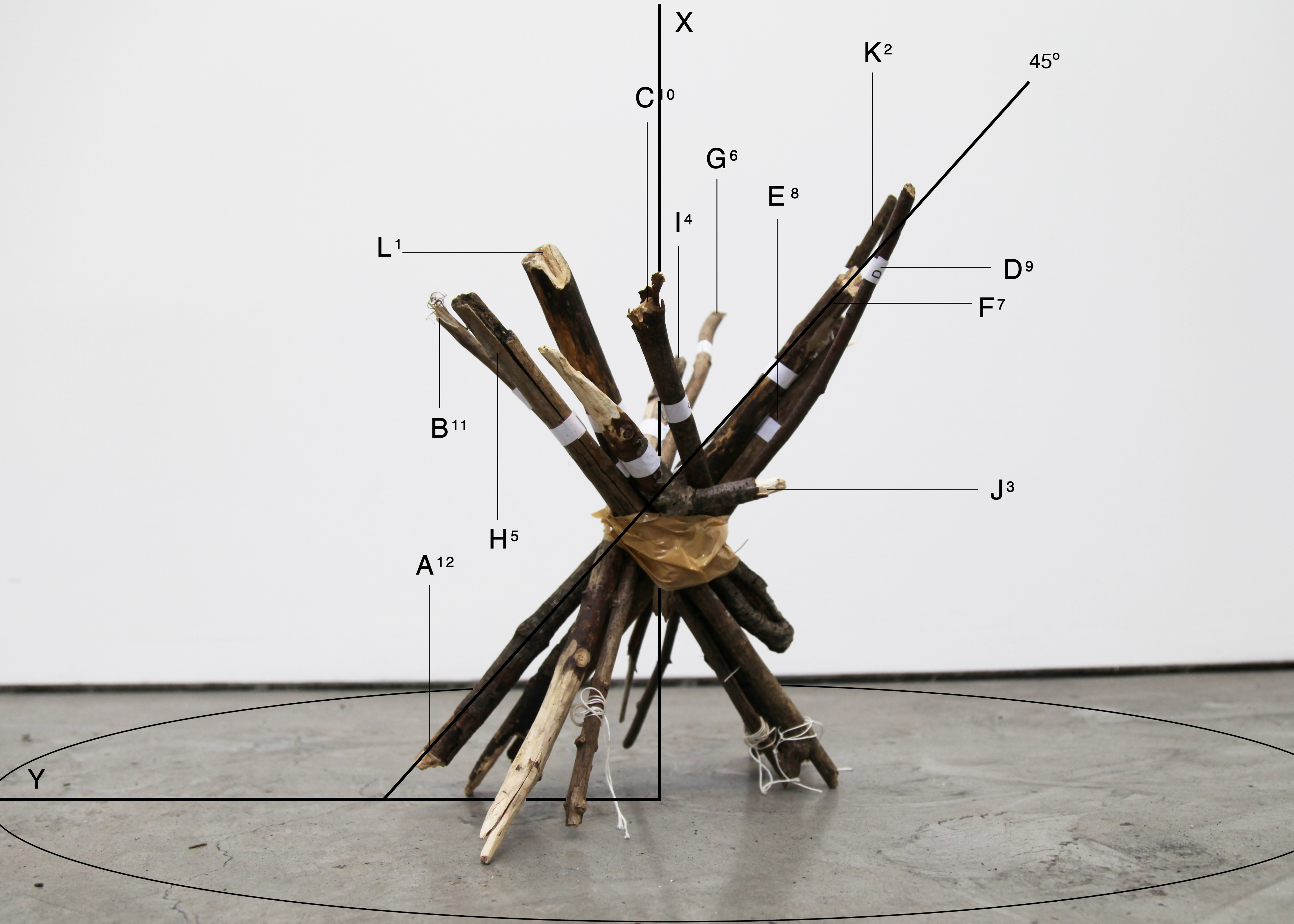 I’m sending you a box with everything you need to assemble my sculpture. It turns out I can’t send it assembled in the mail. It will just fall apart. The instructions that follow are as thorough as I could get them. Please send me photos of the process. We can also skype anytime. My skype name is larscuzner.

Before I get in to the installation process it will be of some use to know how the sticks are categorized.

Moses Harris, who discovered petrified wood, used the work of Isaac Newton to reveal the multitude of objects that can be created from three basic ones. (The ten commandments were, coincidentally, written on petrified wood, but that has nothing to do with this.) Moses was a naturalist who wished to understand the relationship between objects and how they are coded. He attempted to explain the principles of materiality and how further objects can be produced from three basics.

As much as his theory seems to simplify an argument for the purpose of fitting it in to an existing diagram, it does make some valid points. For one, there should have been twelve commandments, not ten, primarily because it makes more sense that three primary commandments times four stages of relations to the other commandments would allow for social life to develop in synchronicity with the natural world. Twelve is a superfactorial, being the product of the first three factorials.

1. Place the sticks on the floor exactly as shown in the image below.

2. Put your hands on either side of the sticks with your left hand at A12 and your right hand at L1.

3. Anchor your right fingertips just below what will be the centre of gravity for the standing sculpture.

4. Your right hand should be curled into a backwards C. Do not curl your left hand.

Now you will plot the x-axis.

Make sure A12 and L1 enter X-axis as headers.

6. Drop your right hand slowly towards you as the sticks gather in you cupped hand.

(B11 and K2 should almost stick to the headers.)

6. Anchor your left fingertips on the floor directly below the centre of gravity.

7. With your right hand cupping the sticks, but the bottoms of the sticks against your left fingertips.

8. Curl your left hand into a C with the fingertips anchored.

10. You should now be holding the sticks in the centre of gravity, just below the centre point, between your fingers, which form a circle.

12. Ask your assistant to place one end of the tape directly under the protruding branch of J3 (this will be just above the thenar space of your right hand, the area with webbing between the thumb and index finger) and wrap it counter clockwise along the horizontal axis.

The equation for a rotational transformation (in counter clockwise

So now, A12 should be the only stick on a perfect 45º angle, point to point, without touching the floor. Both A12 and L1 will be off the floor. The tripod touching the floor taking the weight of the sculpture should consist of – H6 (running parallel with L1and crossing A12), F7 (running parallel with A12 and crossing L1) and I4 crossing both A12 and L1. Everything else should fall into place accordingly, but double check. It should be right, even if it is rotated. Any use?

All this might be a bit esoteric so if you want to skype that’s OK with me.

Done. Use the image as reference.

I really hope you want to put this work in the show. I love your work. Did you know that to conserve metal during World War II, Oscar statuettes were not made out of wood as many think, they were made out of plaster. The only Oscar statuette ever made of wood was presented to the ventriloquist Edgar Bergen and his dummy Charlie McCarthy in 1938. Before Edgar’s dotter, Candice Bergen, had established a public identity of her own she was often referred to as Charlie McCarthy’s sister. But it was difficult for Candice to be the sister to a piece of wood. It was hard to make sense of because you knew he wasn’t real and yet he was treated like a living bigger brother, he had his own room, got presents on his birthday and so on. It was sometimes painful for her, because she felt she had to compete with this puppet for her father’s love and she resented it.

Ventriloquism entails the effacement of the speaker while the speaker pretends to listen. It’s not an issue of who gets to represent whom and to what end, but what our role is in its construction of what we are willing to believe, internalized self-deception or externalized self-plagiarism.

The Mormon Church still uses the Quorum of the Twelve and receives revelations from its prophets; it’s a highly secretive process. The famous prophet, Wilford Woodruff, is well known for having received the revelation that prohibited plural marriage, mind you, at the time when the government was penalising the church for practicing polygamy.

In 1913 Woodrow Wilson became the 28th president of the United States. It was a common misconception that Woodrow Wilson and Wilford Woodruff were the same person. Many Mormon children grew up thinking that the U.S. once had a prophet as a president, which isn’t true.

This children’s song was written to help clarify the issue.

In 1919 Woodrow Wilson suffered a stroke, His wife, Edith Bolling Galt Wilson, spoke on his behalf as he sat alongside. But people didn’t buy that Woodrow was the one speaking. Edith was called “the secret president” or “the first female president”.

You can still get Moses Wood apples named after Sgt Moses Wood who died in 1915 in Wilson’s war.

Don’t hesitate to call or skype or anything if you run into problems.